Keepers of the Commons and the Spring of Resistance

As a bible camp counselor in rural Oregon, on nights where the moon was slivered or new, my campers and I would venture a slow walk to the outskirts of the camp's acreage, with a headlamp in the middle of our line. We'd tread to a small clearing, extinguish all lights, and watch the awesome Milky Way halo come into view.

Point at a star way off to the right, I'd tell them, then point to another out to your left so the angle across your chest is more than 90 degrees. Because of Pythagoras's gift to mathematics, and the raw fact that our closest star is 4.2 light years away, you can know that any two celestial points, so separated in your arms, look at one another across a gap of at least 35 trillion miles. 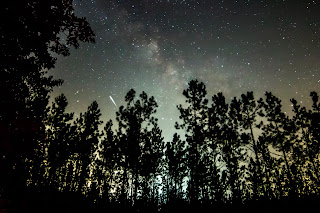 That number is so big as to be meaningless.

To travel one trillion miles is to travel around the earth 1,400 times a day, for eighty years.

The point was not to say anything particular about the world, but to see ourselves in the scale of our smallness, to picture a whole earth on its back in the great dark sea.

At the time, I wanted to talk to my campers about stewardship, about how faith in something beautiful and sovereign demanded that we work in defense of the world, subjects of consequential humility. I suppose I could have had campers who saw the immensity as a shield to do with the earth whatever we want.  But I did not. For those highschoolers, faced to that cathedral, scarcity did not win us license for recklessness. 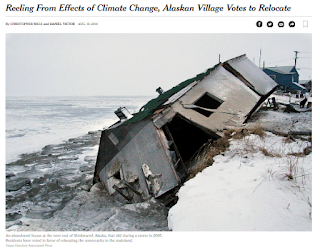 This last week arrived laden with headlines that challenge any such notion of guardianship.  The new EPA director - nominated in the third consecutive year to be named the hottest year on record - chooses not to believe in climate change, nor in the stories of his uprooted countrymen. The personal fortune of the State nominee depends on oil exploration in the most chaotic and unblemished stretches of our oceans.  The Energy nominee simultaneously wants to eliminate his agency, and can't remember its name.

Meanwhile, as December arrived on the pale blue dot, several thousand snow geese died in a few days' span at the Butte, Montana superfund site I wrote about in 2013 and another oil spill, this one in North Dakota, seems a gratuitous jab as we are overrun with reasons to support replacements for old energy.

These days, though, statistics are professional losers.  No matter what goes to print about the power of permafrost thawing in the Arctic, how parts of Alaska have seen a four degrees Celsius jump since 1960 (a number which, if seen planet-wide, would flood whole U.S. states), nor how the central cause of immigration from North Africa toward Europe will soon not be war or terrorism, but weather-related catastrophe, facts do not win. 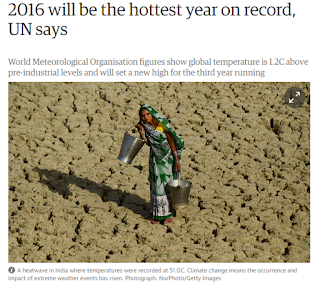 I am guilty of the transgression which causes facts to lose so often: we weaponize them. We wear facts like war medals, hunted, chest-pinned, and paraded in a conquered state. To travel the world and learn it as it is, is an impossible notion but for the interchange of best efforts to describe our realities, unarmed and earnestly curious. It is a two-way street of agreeing, in the blind, that we'll accept what can be demonstrated widely to be true and then - and this is crucial - that we move to its defense, when we feel it's imperiled.

In those counselor days, I spent a lot of time thinking about resistance, as well. Resistance to being of the world.  Resistance to those in Christiandom who called for a great divorce from four billion others that didn't believe like we did.  To our good fortune, the Oregon old growth forests are tiptoed by reasons to resist the weaponization of spiritual truth.

Removed from that place now, I still think about the Book of James, whose author spends a chapter building momentum toward a particular form of resistance, holy in the eyes of his God.

Defend the orphan and the widow, he says, and remain unpolluted by the world.


James's verse erupts out from itself.  He saw not solely orphans and widows, but a world sailing white water, dwarfing, disturbing, often alone and always aching for the works of allies.  It is Muslims surrounding Christian churches to protect parishioners at worship, and Christians encircling Muslim protesters as prayer kneels them in the street. The call to defend the orphan and the widow came distilled from crazed revelation, it is what drops from an awed jaw when faced with the crushing magnitude of our effect on one another.

And so our contemplation of resistance is summoned, I think, when the vulnerable tracts of earth come under threat. Our great traditions are authored by those who choose to be better guardians, to lash their contentedness to the well-being of the unfavored, to make a name for themselves in history as keepers of the commons.

I don't know if Lincoln felt the spring of resistance when he signed part of future Yosemite to California in 1864.  Surely, though, that fountain was all but bursting John Muir and Teddy Roosevelt into flame as they bounced around Big Sur and courted Yosemite, the year my great grandmother was born, exclaiming and getting drunk in the hills (TR and Muir, not Alice). They set off to do something great as others had done before them, by protecting something great, for the people, for the nation.

Relief to find that this rough week also came with dispatches cut of the guardian cloth. Intrepid data scientists and climatologists in service to the informatic commons are heading an international effort to safeguard decades of climate data from the so-far-unknown nature of President Trump's administration.  That North Dakota oil leak occurred a couple hundred miles from the Standing Rock site where native communities recently defended a land they call sacred from a federal behemoth.  And Tuesday morning, President Obama's administration took the Outer Continental Shelf Lands Act of 1953 to a place it's never gone, shepherding huge swaths of Arctic waters into the guarded cohort of territories named by Presidents before him like Lincoln, Cleveland, and Roosevelt.

Resistance has known many springs in our renegade America, never to be bridled in our 35 trillion mile neighborhood.  This, again, may be its season.