A Tax Debate is Coming

It's not nothing that we look at our flooded neighbors on the gulf and check our belts for tools we might have to put in play. Hard-jawed, shirt-off-your-back culture has put Texans in the water for days wading out to find their neighbors. Money, food, boats: purpose leans us toward the tv and hurricane season is made kaleidoscopic in citizen rescues.


These disasters are worthy of lyric and poem like any of the old epics. We are grief-struck to see bodies in the drift, because we understand loss. All-the-sudden heroes lift someone's grandparents from a half-flooded home and a thing in us elates. There is a deep in you that readies itself to contribute.

It strikes me that we are possessors of this power all of the time. 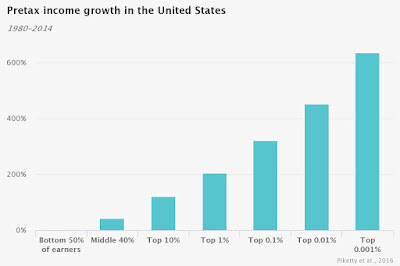 The third most stolen good in America is electricity. An apartment in parts of Milwaukee will cost you $500 a month and you may still have to bucket water from the toilet. More than half of the working poor in America spends at least 50% of their income on housing.*

Most Americans do not have $500 available to mobilize in an emergency and nearly half of the country has no retirement savings. The median American home is less affordable than it has ever been, pre-tax income for the bottom 50% hasn't risen since 1980 and at the end of the year, members of the middle class have little to nothing left-over to start building something better.

Americans briefly "deleveraged" after the 2007-2009 crisis but they didn't do it by spending less, where there was little fat to trim in the first place. After all, GDP growth since 2000 has depended more than anything on the middle class's willingness to use credit. No, they deleveraged through bankruptcy, foreclosure, moving out of houses and into apartments (lowering debt but eliminating their equity) and millenials - you may besmirch them as the head-down smartphone generation, I empathize with them as the student debt generation - have just put-off buying homes altogether. 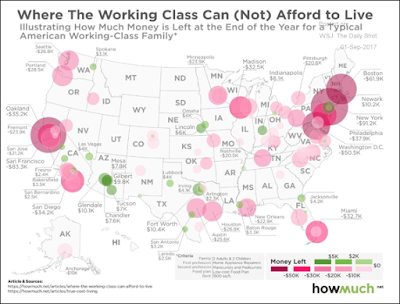 The middle-class promised land is a drought-cracked place for some, and a high-walled neverland to others.

That thing in us that looks to correct suffering amid cataclysm is likely the truest needle in the national compass at this moment. And in national policy, we have a chance to chase and develop our instinct.

A tax debate is coming.

The Trump tax-reform theme so far has centered on the old tenets of trickle down prosperity theory. Estate tax, corporate tax, pass-through tax, repatriation tax - if we lower those, so the theory goes, the middle class wins.

This is less likely to work now than perhaps ever before - and it's never worked well in America. It need not be an indictment of affluent character to observe that wealth becomes more insulated, not less, as it becomes more concentrated. That is both what we observe, and an intuitive consequence of market instruments designed at their root to recycle investment returns to the ones making investments. Pushing money to the wealthiest corners of the economy has never been a promising way to deliver benefits to the middle class.

Lower interest rates and Quantitative Easing have been the chief instruments employed since 2009 to coax America out of recession, because Congress has sat on its hands. Those interventions - while likely having rescued the financial system in 2009 - are dramatically asymmetrical to the benefit of people who already have wealth, who have huge stakes in stock and bond markets, and who (corporations) have the power to borrow at interest rates near zero and then invest in levers only available to entities with huge capital. The "wealth effect" is often imaginary, but it is always imaginary for the majority of the country, who have no wealth to speak of.

Recently Mr. Trump said that lawmakers have a once-in-a-generation opportunity to change the course of the country with tax reform. There is no doubting that.

Congress could halve the interest rate of existing federal student loans - which currently yield more than junk corporate debt - and preserve the Public Service Loan Forgiveness program. They could build an infrastructure fund through taxes on American exports of crude. They could remove the loopholes that make a 15% effective tax rate for millionaires possible. They could give the IRS its fiscal legs back, so it can track down the 60% of tax on unreported income that is not paid. Instead of cutting $800 billion from popular services - like Medicaid - Congress could consider moving the top marginal tax rate back toward the weighted average of the last century.** They could simplify the tax code for small businesses and make sure that hugely profitable multinational companies pay their taxes at all.

The conversation has become so convoluted that folks willing to wager their bodies and property to serve their neighbors have come to believe that the patriot's vote is one that lowers tax and cuts spending, at any cost, regardless of the fact that their neighbors eat, heal, and educate themselves with those taxes, and that the wealth that generates those taxes depends on a well-fed, well-trained population, healthy enough to have a real shot at self-improvement.

One of the largest storms to ever traverse the Atlantic will twist its bluster toward Florida this week. No doubt we will respond in hero droves to whatever wrath it leaves. With the tax debate on its heels, it's sure to be a season for citizen rescues.


====
* Evicted. Matthew Desmond
** It is now 39.6%; the simple weighted average since 1913 is about 57%. It makes sense then, that the aggregate wealth of the top 0.1% is equal to that of the bottom 90% and trending higher for the first time since 1920. A 57% top marginal tax rate would mean that after a household has earned $419,000 in a year, they'd have to give $0.57 in tax for every additional dollar they earn, in order to help make sure poor and old people - like the ones losing their homes in hurricanes - have decent healthcare, to say nothing of emergency assistance in natural disasters.