The Farce of Zero

The farce of zero is the veil in which the GOP will raise taxes on the working class.

Take an American household making an annual $60,000 - right at median, as many households making less, as there are making more. The 50th percentile.

It's tempting in conversations about income and taxes to speak in nameplate numbers: The family making $240k earns four times the $60k family; that is true because 0 is zero.

But the number 0 is not how life works.

If you are of working age and make $0, you are likely completely incapacitated or wholly dependent upon the care of someone else. At $12,000 a year you may be pandhandling for motel rooms or food. If you are a single parent of two making $27,000 (~$13/hr) you no longer qualify for certain benefits like SNAP, but you likely spend north of 50% of your income on housing, it's not implausible that your heat, your plumbing or your doors do not function, and even if you qualify for housing assistance your chances of getting it are 1 in 8.

In 2016 eighteen million U.S. households lived in apartments. Most of them made less than $50,000. Meanwhile, the national median rent of over $1200/month implies your household should make at least $80,000 to afford the median apartment in America.

You can have a lot more than $0 and still have barely more than zero.

Which of these things do we begrudge a hypothetical middle class family?

These are the break-even-budget realities of working class Americans.They reach the $60,000 mark and not only have they not broached retirement savings (10% of 60k = $500/month) or emergency savings (80% of health plans have deductibles) or long-term care for aging parents or credit card interest or diapers, but daily life is magnitudes more complex than this napkin math. Expenses seep from roof shingles and car tires and the ledgers bleed red; it's for the pressure of those things that GDP growth since 1990 has relied so heavily on an expansion in consumer debt, not growth in incomes for average workers:


Authors of tax policy talk about $240k earners - let alone $400k or $1m earners - as if they are ahead of the median income household in America by no more than the difference in their salaries. Behold the farce of zero. It ignores the Sisyphus mountain one must climb to the break-even point. It plays arithmetical tricks that land us with decades of bad policy and a steeper-than-ever bent in favor of the wealthy, to the detriment of our spending on schools or broadband or mass transit.

The farce of zero is vulgar toward the majority of Americans because it forgets the meaning of breaking even, it fetishizes "pulling yourself up by your bootstraps" while ignoring that half the country has been holding themselves up by their bootstraps for decades. Breaking even (or worse) year after year means perpetual vulnerability to small events pushing you off the rails, it means an inability to plan passed this pay-period, and it obviates any intention to save for retirement or college or grandkids, as the shepherds of personal finance (and condescending Congressmen) would prescribe.

Of course that number is nonsense for a bunch of reasons. People that invent revolutionary tools, that take risks on ideas, fail and reiterate, that orchestrate new businesses and employ others should be rewarded handsomely; some of them deserve tens of times what other people receive. That even-income number is as impossible mechanically as it is absurd to justify on its merits.

So consider it an extreme we know we don't want - an impossible 1:1 ratio across all workers.  What would be a similarly failed expression of capitalism on the other end of the spectrum?

What measure of inequality is equally preposterous? Does it look like this? 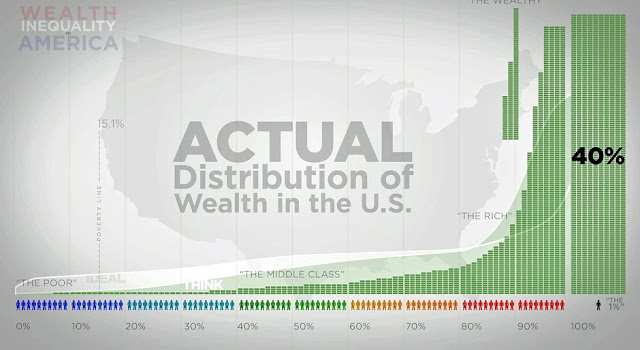 Profound structural inequality must, among other things, turn us toward more progressive tax policy.

Fiscal Shepherds and Wizards of Growth

Surely, what one day lands the charlatan in hell after selling lemon cars, flood zone homes or wax wings is the moment he takes the buyer by the hand just to say, "I'm looking out for you, friend."

That sleight of hand is not exclusively a game of the Congressional Right, but my of late have they made it their craft. Speaker Ryan ignores that just beyond the horizon of this bill, his middle class Wisconsin will see higher taxes to pay for repeal of the estate tax - the tax code's most progressive component. He knows that only 2 in 1000 estates would be subject to the tax, and that current law leaves their first $11 million untouched. But the farce feels so good.

“You actually create jobs by getting rid of this death tax,
because you know what kills one family business
from passing their business on to the next generation?
The estate tax.”
- Speaker of the House Paul Ryan

“To protect millions of small businesses and the American farmer,
we are finally ending
the crushing, the horrible, the unfair estate tax."
- President Donald Trump

And both men - thorough-bred cowards at the podium - say nothing of the programmatic cuts that will surely come as their deficits weigh on the nation.

Their hubris all lands flat for a reason.

The Center for a Responsible Federal Budget has been beside itself:

"The House approved debt-financed tax cuts based on predictions of magical economic growth that defy history and all credible analyses.

Tax reform should grow the economy and not add to the debt. Unfortunately, lawmakers are assuming faster economic growth will pay for that debt increase when there is no evidence it will cover more than a fraction of the tax bill's costs." 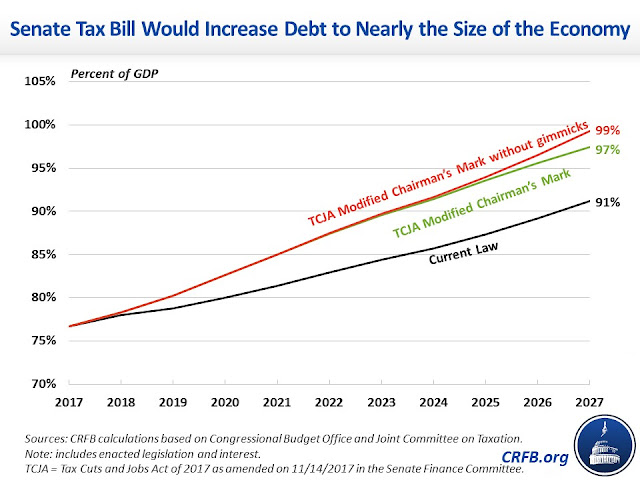 Honest fiscal conservatives - namely one accountant Senator from Wisconsin - see that the GOP's change to taxation of pass-through companies (the most common type of business in America) won't actually help small businesses, because like with individuals, they offer relief to the wrong end of the spectrum.

Notice in the charts below that if you give a tax break to companies currently in the 35% and 39% marginal brackets, you do nothing for the huge majority of businesses. That's what the House bill envisions. So far, the Senate bill ignores small businesses altogether. 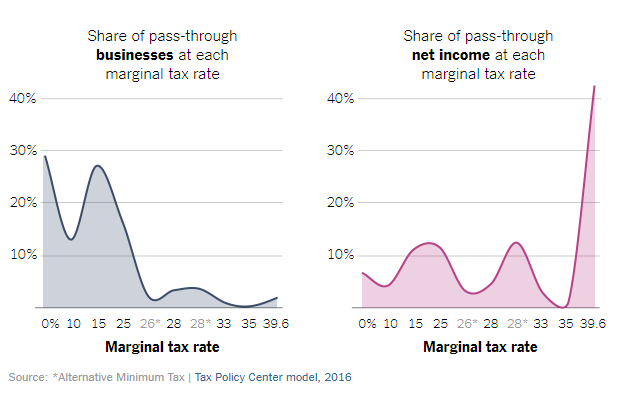 The incoherence of the rhetoric and the impossibility of the math make the corner stone motivation of the Congressional tax bills hard to identify. Legacy, donor pressure, midterm elections - they're all in play.

But the hobbling wound in GOP logic, here, is blatant and pervasive. For all their Main Street credentials, they do not acknowledge the middle class meaning of zero, the year on year reality of breaking even. They would wield the farce, and take us for fools.