Closing the Trickle-Down Tap: Capital has an ally in the White House

In December of 2017, the United States borrowed a trillion dollars and gave it to the country's top earners.

These sorts of giant fiscal moves are usually brandished at the beginning of a business cycle to stoke an economy into recovery after recession, when government is something of a lonely buyer in the street.

Below you can see the monstrous leap in federal debt starting with G.W. Bush's 2007 TARP program, trying to push liquidity into markets as the world started its slide into the Great Recession. That debt growth inflected down with Obama and began slowing.

President Trump has inflected that curve again, the other way, accelerating debt growth through tax cuts to high earners. 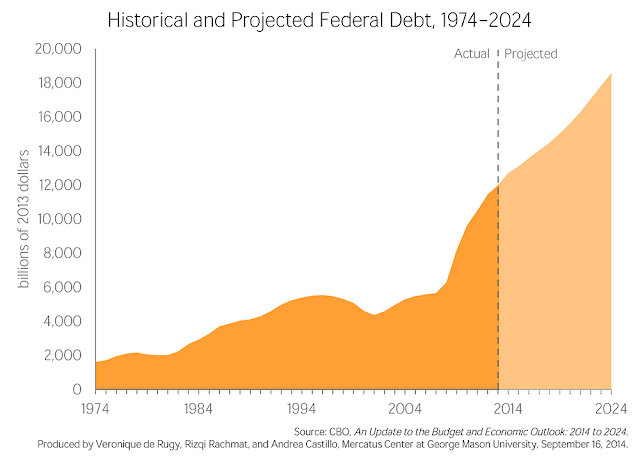 GDP growth in the 2nd quarter was 4.1%, which historically is solid, closer to the clip we should be at quarter after quarter if the economy is growing at better than a limp.

Unfortunately, that 4.1% is an annualized rate, meaning it was one quarter's growth multiplied by four, and that one quarter's growth was juiced by American exporters trying to front-run higher costs from the bubbling trade war that the President has stoked with China.  We likely won't see 4.1% again for some time.

The rhetoric driving last December's Republican tax cuts, though, was that employers having saved money on taxes would raise wages, increase their capital investments, and the economy would boom.  Of course it didn't do that; and that was never the objective. The economy has never responded that way to tax cuts aimed at corporations already paying below-international-average tax rates, nor at wealthy earners. Congress knows this; it's unmissable in the data.

It is undeniable that those cuts leave hundreds of billions of dollars for companies to work with. Yet, an odds-on bet says the buying power of your neighbor's paycheck has shrunk this year.

How does an impulse of money that large not make it to wage-earners?

Here's a start (these numbers are in millions): 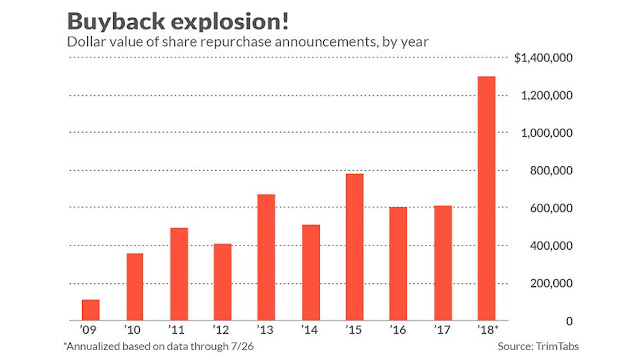 Trickle down economics has never worked well, but at this point trickle down economics is structurally an impossibility, insofar that the "trickle" is neither part and parcel of extreme wealth at the top, nor something that naturally occurs after heaping more wealth on the already wealthy. That chutes-and-ladders notion of economics that's sold to voters simply doesn't exist.

The high tower of capital can be thought of as a self-contained system of circulating benefits.  We see this reality in clear relief when the economy stops growing, in slow downs and recessions, where growth of wealth for middle earners stops completely or reverses, but presses forward for households with enough money to invest for passive income.

The world's bond markets - where companies and governments sell debt to large investors - are the most significant component of the investible universe.  The U.S. bond market is twice the size of U.S. stock markets. Investing in stocks is playing blackjack.  Investing in bonds is owning the casino. That's the magnitude of capital.

The two exceptions that puncture the bubble of capital and have the power to recycle wealth into the middle class are wages and taxes. Of course capital needs inputs from labor, so it forfeits wages to workers, but, at the moment, that concession to labor is the smallest it's ever been. Here's the worker's share of national income since the '40s:

We've simultaneously managed to suppress the corporate share of taxes, likewise, near the lowest level in history.

If you give companies a tax break, the companies have some new cash to work with.  Sounds good.

So when a company receives a chunk of cash registering in the billions, indeed, the thing most beneficial to the economy is to grow the business, but the most profitable thing to do for the small circle of beneficiaries is buy back the stock of that company, boosting its price, whose level either determines their pay (company executives) or swells their portfolios (stock owners). It's not conspiracy; its the architecture of our economy.

There is no path between President Trump's tax cuts and the American working class. We knew it when they wrote the bill. And it's played exactly as we suspected.

For good measure, here's a hundred billion more in the pipe. They weren't even shy about it this time. 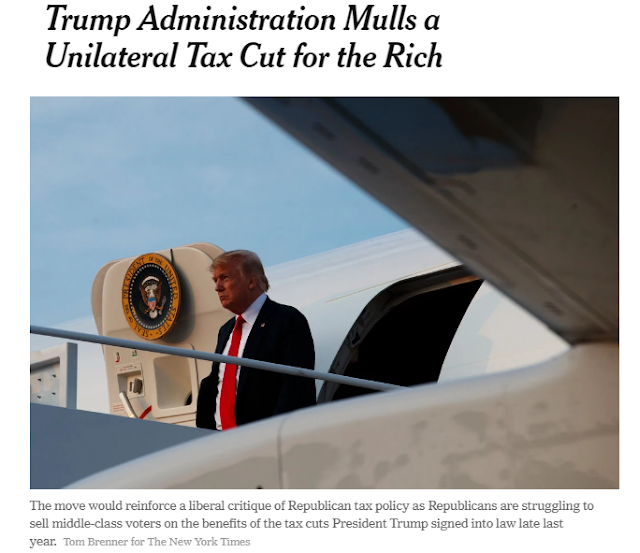