Social Security: Why are we ignoring $1.2 trillion in Earnings?

On your paystub you'll find a line labeled "FICA" or "OASDI" (Old-Age, Survivors, and Disability Insurance Trust). That's your payroll tax and it makes you a sustainer of one of the most powerful social safety nets in world history.  With that tax on your earned income, you and your employer help to keep older folks out of the sort of poverty that crushed retired Americans before it was established in 1935 by FDR (Social Security), and then complemented by Medicare in 1965.

Perennially we quibble over the solvency of Social Security, mostly due to demographics:  we live a lot longer than Americans did in 1935 (59 then, 78 now), the ratio of workers to collectors is falling (from 5.1 in 1960, to 2.8 in 2013), and the boomer retirement wave has just started rolling. Most of that problem is mathematical, not political.

But the justification for the ceiling comes down principally to the idea that Social Security is an insurance policy that Americans pay into - in a sense, an insurance policy against poverty in old age.  High income households don't need that policy, so the theory goes, so they're not taxed for it. That's it.

We spent $916 billion on social security in 2016, which shakes out to 24% of the federal budget. The social security trustees, who oversee its administration and forecast its long-term health, project that the trust fund reserves will run out in 2034.  This is not as dire as it sounds; the program would still manage to pay out 3/4 of its benefits on tax revenues beyond 2034, so long as legislators do not carry out the cuts Republicans are proposing. 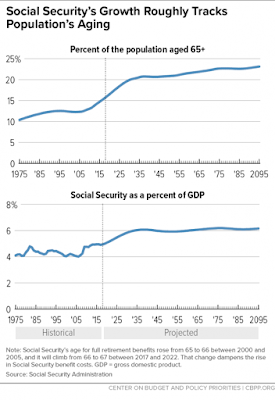 For some back-of-the-napkin math, if we simply eliminated the $128,000 ceiling, so that all income would be taxed for social security like middle-income households are currently taxed, we'd generate another $150 billion per year toward keeping it solvent.

Ultimately, the best long-term solution to relieving the national burden of Social Security will be higher salaries from companies that haven't given their workers a real raise since the 1980s, and then better retirement planning once salaries rise. A solution most any worker would welcome.

But removing the ceiling in the meantime would take care of 88% of the funding shortfall and would level the payroll tax playing field between middle-income households for whom insurance against poverty in old-age costs north of 6% of their earnings, and wealthier households, that pay out a smaller proportion.

Complaints of unfairness toward high-income households just aren't compelling here.  Middle-class salaries have been stagnant for three decades, while growth for high-earning households has been scorching.  The median retirement account has $1,100 in it.  The rate of elderly folks declaring bankruptcy has tripled since the '90s and wealth inequality is actually worse if you narrow the scope to folks older than 60 years.

Leaving one sixth of the economy untaxed - the wealthiest sixth, at that - is nonsensical. It is more likely that the valuation mechanisms of Our Capitalism have been warped beyond usefulness - and thus don't assign middle-income workers value enough to include security in old age - than it is likely that our current tax structure appropriately insulates the top 10% of earners from the demographic burdens of the country.

2. We spent $916 billion on social security in 2016; https://www.cbpp.org/research/federal-budget/policy-basics-where-do-our-federal-tax-dollars-go

4. Counter argument to raising or eliminating the ceiling; https://www.forbes.com/sites/ebauer/2018/04/28/so-hey-why-not-just-remove-the-social-security-earnings-cap/#1f02e812b237

7. What the 2018 Trustees’ Report Shows About Social Security, CBPP;  https://www.cbpp.org/research/social-security/what-the-2018-trustees-report-shows-about-social-security