The Women Holding the World Together

“…take our fate into our own hands.”
- Chancellor Angela Merkel


I started writing this piece two years ago. I felt it had missed its train on account of my lollygagging. Today, we're back on the station platform; this time we won't miss it.

But let's go back.
It began in Venezuela.

Two years ago around this time, a mob stormed the National Assembly with sticks and pipes, bashing members of the opposition majority, the only branch of government that President Nicolas Maduro did not control.

Protesters were killed. Medicine was scarce and food rationing was worsening. Rocketing inflation made it easier to weigh bolivars than count them.Venezuela was sliding.

That the world would undertake its own unwinding is no new phenomenon. But it serves us to keep an on eye on the splitting seams, where we might tear for good if not for the hands of a few that grab the skin of the earth and steady it as it bucks.

In Venezuela, that steadying hand was then-Attorney General Luisa Ortega.  Ortega was a member of Maduro's party, but after Maduro orchestrated the sham election of the Constituent Assembly with an eye toward securing permanent rule, Ortega stood up in the current to deny Maduro's regime an unopposed route to permanency. She shouted the watch as Venezuelan state institutions were disassembled.

Before the whole world was paying attention, before an assemblyman named Juan Guaido became the symbol of Venezuelan resistance to Maduro's dictatorship, Luisa Ortega was buffeted with threats and visited by the regime's soldiers, and still she rose to defend one of Latin America's most fragile nation states.

In our time, it's women holding the world together.

For the past two years, the stories that crossed my sterile work station each day, of women standing post to steady the earth's great cleaving, have evaded my accounting.

The quantum chemist three times elected to the high offices of Europe arrived at the top of German political power in the era of terror. The extreme violence Europe saw in 2004, and for years beside American allies in Iraq and Afghanistan, gave way to global financial seizure in 2007, which battered the United States and then rattled around in the pipes of European banking for years. Germany's financial edifice (warts and all) was the true equity of the European credit pyramid and Greece threatened to take it all down.

No doubt, Merkel helped shelter German investors and pensioners by sharpening the austerity imposed on Greece, and Greeks suffered for it. But she wouldn't let the eurozone crumble, even if it meant putting at risk the assets of furious northern Europe in an effort to save the notoriously corrupt, clownishly mismanaged Greek economy.

Merkel braved crosscurrents that have swept the tantrumming big men of Washington and Westminster down river into protectionism and brute cowardice. She saw the fascist mold at work as a child in East Germany and is a commanding opposition to its revivalists today.

She watched the Americans retreat from the helm of statecraft and cooperation, led back by a corporatist authoritarian. She knew the wings of Europe teemed with opportunists sharpening their teeth, belligerents like le Pen, Farage, Salvini, and Orban. She saw a million and a half migrants flee North Africa to Germany. Still she held the line. A pragmatist, to be sure, she is atlas of the center, unappreciated until, god forbid, the global center does buckle.

Some of the women holding the world together do it as icons of a changing paradigm. Their stories are young and uncertain.

Alaa Salah came into such a role when an image of her went viral in April.  We see her stood atop a car, draped in white against North African dusk with a finger at the sky. In the old Sudanese tradition, she was reciting a rebel poem to a crowd in Khartoum as revolution sizzled around them. The first row of listeners were all women donning head scarves and energized. The dictator Omar al-Bashir, of Darfur infamy, had been deposed. The days ahead of her would prove - and still are - bloody.

Then nameless, Alaa Salah was the picture of something old - a country, a culture, a people - electrified by something new.

It is all but impossible for the speech of people captured in such moments to then live up to the welling they first inspired. Because their words, as with all humans, can only speak to so much of us. 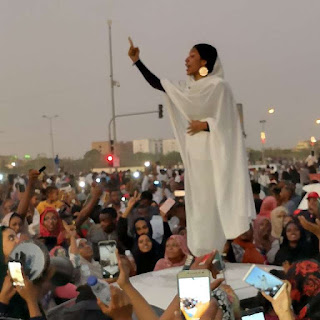 But when we look at Alaa Salah frozen in time on that car top or hear that young Malala Youseff has refused the Taliban bullet in her head, the whole of our internal universe sits up. The few nodes in us where maybe words can materialize are joined by the larger space of our mute self by which we understand the world more fully.  We are alert to the whole of what the scene before us means, or what it might mean.

I see them, and they seem innumerable.

They are the women financiers of Iceland shepherding their economy out of ruin wrought by cartoonish men pulling long levers of speculative finance.

They are cohorts of women politicians in America and New Zealand absorbing the ordinance of progress in their national centers of power.

They are Sudan's women tea vendors demonstrating at their peril against yet another extremist grip of dictatorial men at the helm.

And, believe it or not, they are soccer teams. They are Megan Rapinoe and her teammates who shoulder a national pride and engine forward, speaking plainly to indecency on one flank and to inequity on the other.

I see them there, and others, doing their bit.

They are the women holding the world together.