Home in the Head Frames


Stewing on the northwest corner of Butte, Montana, just north of the Highlands Range, is the Berkeley Pit, a sprawling strip mining caldron half filled by an uninhabitable lake that my friend Colin points at in the early morning dark and says, "this is why I can't be confident in my drinking water." 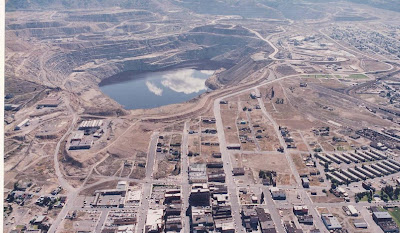 Our tread was better than a stumble and softer than a tromp, yet definitely not possessing of all the coordination of sober people. Fireball is a Canadian-whiskey based liqueur that punches of candied cinnamon like little kids' Atomic sweets by the same name.  Turns out, Butte drinks it like Denver shoots Jameson, like D.C. bartenders gulp Grand Marnier, and it's well chased by Milwaukee's blue ribbon wearer of 1844.  Butte welcomed us generously.

I had caught up to Simon and Colin where they stood at the edge of a grassy overlook which spies the southern mass of Butte to the south and west.  Generally, benches suggest 'sit awhile and look.' But such proposals do not often extend from the gangrenous avulsions of industrial ambition, so the rubber thread seats drilled into concrete atop this peninsular hill were made strange by the abyssal pit, past our toes to the east.

That particular darkness snuck up on me.

When I drink - when I drink - I mumble to myself, reciting and trying to remember the small paragraphs of newly imagined pieces as they float past my brain in the transient wounded-genius of short-memory starved insobriety.  So I only really see the pit when Colin loops my neck in his arm, lifts a pointing hand, and tells me his mother Paulette had grown up there.  And I don't get it.  He gestures to the hole's center darkness.  "That was her fucking neighborhood." 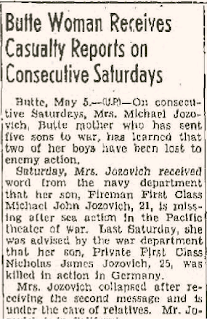 Colin's grandfather settled atop the north hill after losing two brothers to the maw of the second World War, one in a tank rumbling across Germany, the other on a battleship cutting the skin of the Pacific. Their mother, Clara, learned of her losses on consecutive Saturdays in 1945.  The second announcement, reported in a Montana newspaper, is dated May 5th, three days prior to America's celebration of Allied victory in Europe.   Stirred into the pit, or divvied amongst its thirty years of dump trucks, was the Meaderville township, bound up with memories like that of Clara Jozovich, folding inward on her floor under the weight of her time.

It's quite a hole, really. At a half mile square and a third of a mile deep, it took an excavation of this magnitude to lower back into the earth what the residents of Meaderville, East Butte and McQueen had raised from her. By some counts, Anaconda Copper and Atlantic Richfield Company drug a billion tons of dirt and mineral from the richest hill on earth, between 1955 and 1982. One could think that this acidic, 40 billion gallon red-green-gray-black pool of abandoned ambitions and human irreverence would dominate all the stories of Butte.   And, indeed, I think it must touch most of them, somehow.

But what possesses the legs of strangers to huff passed those old head frames on the north hill, to hang fingers heavy in the wire fence and read the count of men these mines swallowed, is not the mechanism of the city's last slow decline. We on the outside are impelled by the hands we see peeling the city's eyes back open, the timbre of voices huddled in the city's corners which want to bring art to this town because it already has life, and to them, it seems the two should be in communion. Communion. Extraction's reign is waning here and communion is heir.

You can sense a certain momentum.

We visited Todd's uptown apartment hooded against the next afternoon's rain. It's a loft space with the face of a studio which gullies into a full kitchen and bottlenecks onto an open balcony, peering south on the city. The innards of an old grand piano are slung on one worn wall, wreathed in book shelves. Antique news clippings on the refrigerator flank remember the spectacle lynching of a labor activist in not-so-long-ago Butte. A lurching paper, paint, and metal collage looks at you from above the sink. And I don't know these people. But I feel like I know these spaces.

I've listened to young genius on such kitchen countertops, and set quiet on these screen porches, and stretched to records' croons on those wooden floors, albeit in Minneapolis and Denver and D.C. It's easy, in these spaces, to sense a looming goodness, nearby. Always it lurks heavy and important, waiting for illumination and articulation. It haunts and charms us and crawls our inner caverns. It speaks beautifully and asks much of us, though we grapple and retreat inside ourselves to understand it. Here I met a Montana cohort in the throes of that illumination, scouring one another's creative brains for ways to better articulate the goodness.


Todd the Ohioan, a few shades short of 30, works on the development side of Butte. He's a recent college grad and AmeriCorps vet with a coveted real job. No joke. He'll tell you himself that young people blow in and out of this town because, despite wanting to believe in the future of yet another northwest city which venerates its blue collar history and generations of hard work with new minds and good art and an appreciation for the sacrifices of old cold winters and empty tables, jobs sprout from stressed soil here. So the young and capable come, and get excited, but can't eat their enthusiasm nor offer it to hungry creditors and thus, shove off to elsewhere.

I have no collateral science to offer you, but I would bet in my window-shop math that one of five buildings in uptown Butte sits vacant. The emptiness births a tension between historical preservation and the removal of decrepit, neglected buildings for new creation. It's been Todd's charge to convince a vocal minority in Butte that, wielding his development proposals, he's not there to take their town or their story. He seeks to help others find theirs.

I sit with Simon and Todd and another Montana native named YungBen in Todd's living room.  We trade stories of snowboarding and rock climbing as tokens in the common currency of young man acquaintance.  Spread in pieces on the kitchen floor to our left is a rough draft of issue #1 of BAM, the zygotic monthly publication a half-dozen or so Butters are coaxing into flight.  This Butte Arts Monthly rings of Denver's Westword or D.C.'s Washingtonian, except that it's 8 pages and you've never heard of anything in it.  But that doesn't matter.  They've set their hands to building a communal touchstone, a place to which one can return and know the life and talents of the people.  Bent and chattering over the dismembered, never-published publication is a group of potters and writers, a community organizer who is rarely cut a paycheck, and my friend Colin, who scribbles some mad prose and rocks the IT desk at the local library.  They comprise a shoddy yet convincing editorial team.  They sense the goodness looming, and they're chasing it.

Todd and I turn back to his work and he says something about Butte that I have felt to be true since our camping trip in the Tetons begot bar-hopping and hill climbing in this Montana mining town.  He tells me flatly, "You can sense a certain momentum."  And I agreed, in what I calculated to be a distinguished, quiet nod.  I wanted to jump around and slap the floor and scream his rightness.  Because you can sense it.  You can sense it in the way Colin looks at the old church in uptown where the grandparents of this place used to have wrestling practice.  You can sense it in Carol of Finntown, who tends bar and sells me, with her smile, her last hat at the Helsinki Yacht Club on the shores of that pit mine lake. You can sense it in the tattoo ink of young people who are spoken to by old authors and hard music and, like Butte, have rust on their edges from all the days they've already weathered, but like Butte, have centuries left in their legs.  You can sense it.

Todd spoke to me like, stowed away and clandestine, I was a guest in the printing room of an opposition newspaper, like something in the war was about to turn and this small congregation of dissidents fought to stave off giddiness.  Yet, Todd reserved a vacancy in his eyes.  He seems to know how close he is to the project and how that should make him wary of overzealous optimism.  He wants not to speak too gently to the young bird, lest it sense its own frailty and not fly after all. But he knows too the turn-over of these ranks and how a lack of affirmation culls the flock.  Most of all, he knows he's not at war.  Their task, like so many others more worth our time than war, is the peaceful reconciliation of differing visions for a place that means home to many.

These are the unlikely hands on the town's rudder. The giants of mineral extraction set the bow of Butte to white water and rocks, tied the wheel and abandoned ship. But these decidedly impoverished few are here with pocket knives and the contagion of good ideas, slashing at the tethers and pulling this place somewhere better. The Butte Arts Monthly, published for the first time June of 2013, does not announce revolution or rebellion. It endeavors to remind Butte of its unconditional, unqualified beauty, to bring forward from shadow this momentum sensed even by strangers.

Reasons to leave Butte enjoy a market of their own, an economy of half-kidding jeers lobbed toward a town in which permanent residence gives outsiders occasion to chuckle and sneer. Except that the elements of residence by which people are called back home crowd and litter the streets of uptown. I found belonging, pride, and that species of success which only exists on the tattered far side of struggle, all residing here. The nature of humans eventually turns us, one day, to peer back and see the vanishing thumbnail of where we come from, to invert and climb our roots hand over hand, deeper into the dark of what about us is almost forgotten.

But home calls to some from a place not yet begot. Those people suffer homesickness for what they're called to build, summoned to defend and pursue the good that could one day be a place they're from. My friends in Butte have lifted a substance of that constitution from the knees of Clara Jozovich, a proverb born of the tension lines in stressed tendon and sinew, salted with both the joy of family and the stone wisdom of loss. It begs them, labor on and chase the good; hold your town and make home. These residents of Butte, with whom I had the pleasure of shooting Fireball and editing the inaugural pages of a young zine, scrape their living and spend their time softly altering the voice of this old town, that it might continue welcoming home any who seek it in the mountain palm of the Highlands.