When asked on Monday whether he would declare a federal state of emergency in response to SARS-CoV-2, the virus causing the COVID-19 disease, which would free up federal funding to try to head off a national contagion, President Trump said no. It hadn't risen to that.

At a press conference Monday, it was unclear as to whether Medicare and Medicaid would cover medical services intended to detect and treat the coronavirus. Didn't rise to an emergency declaration of support there either.

Before all that, though, Monday morning Trump was pushing Fed Chairman Jay Powell to cut interest rates to allay markets. The President, as always, had an eye on stocks.

This morning, the Fed appeared to fold. It made an emergency cut to the fed funds rate of 0.50% from 1.75%.  The rate cut may have tickled the President, as he is in service to capital markets. But the Fed sees something brewing. 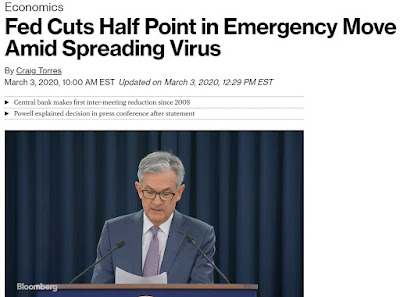 The Federal Reserve only rarely cuts rates between meetings. And 50+ point cuts are rarer still:

The Fed has assumed a war posture.

South Korea approached it similarly. A country of 51 million people and an economy of $1.5 trillion has managed to run nearly 70,000* tests.  The United States, at 7 times the population and 15 times the economy, had by Monday tested about 500.

Calm is well-prescribed for such a disease; most of us will hardly get a cold from this virus.

And to be sure, that's the tempting place to relax our thinking. The yearly flu is much worse. We administer 160 million vaccines every year for the flu and, every year, we still lose ~30,000 people.

But I'm afraid we are digesting the wrong coronavirus numbers. We're hearing absolute values, for the early innings of one outbreak. The real cost of this disease is defined by rates, for an indefinite number of outbreaks.

The question bears re-framing:  As is often said, the annual flu is a horror that we manage well. But remember that we already lost our battle with the flu. We lost to the flu decades ago. And our punishment for losing to the flu constitutes those ~30,000 deaths and tens of millions of hours of economic damage, annually. Flu is endemic.

We already live in the yearly-flu-season paradigm. We are still in the pre-yearly-COVID-19 paradigm.

We are in the equivalent of a pre-flu-season era, but only barely. This little virus is very contagious and kills very few of its hosts, compared to the likes of MERS or Ebola. With an Ro of ~2.6, popular epidemiological models say numbers won't level off, without containment, until 60% of the population has it or is immune. In the US, that's 210 million infections (~350mm*0.60). A death rate between 0.7% and 2.5% would mean 1.4 million to 5.25 million deaths in the US. It's likely to embed itself in our ecosystem permanently.

Our appropriate response to this outbreak depends on the paradigm we choose:

Mitigation - Tip over your king, concede that yearly SARS-CoV-2 outbreaks - more contagious and more lethal than the flu - stretching out indefinitely into the future, are inevitable. Treat the sick, look after each other, eventually develop a vaccine, but adopt little in the way of medieval barricade strategies. To be clear, that is our current footing. We have not stopped interstate traffic to affected areas. We have not asked cities to self-quarantine. We have only tested 500 people. We have not begun to get our arms around how many cases are in the United States.

Containment - Or, act decisively to contain it in the United States. "Defeating" a virus like this - and I mean fighting off a future of recurring outbreaks - is not a "whites of their eyes" sort of endeavor. It's shock and awe. Authorize tens of billions of federal dollars to prioritize the well-being of healthcare workers and to make testing and treatment free to patients. Erect structural or procedural barriers to isolate outbreak centers (i.e. cities). Strategize as to how we can best, cooperatively, deploy resources for vulnerable communities. Risk the certain economic shock such containment measures would inflict on the US economy and the equally certain havoc a wounded US economy would visit on the world, which is already starting to reel from the recent sudden stop of Chinese commerce.

This is the shock and awe option. We do all of that, to substantial economic sacrifice, to try to avoid adding COVID-19 to our roster of endemic, omnipresent disease.

Epidemiologists from Yale and Harvard, as well scientists at NIH, think we're likely too late to choose that option. South Korea is running a remarkably swift, ordered, and comprehensive response (drive-thru testing centers!). China's response was at least as remarkable - notwithstanding the likelihood of fabricated data and a totalitarian surveillance state. 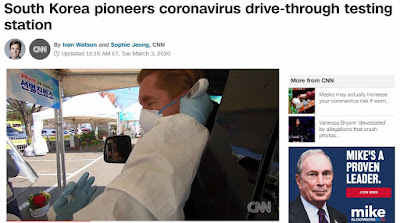 But China locked down the movement of 100 million people. South Korea closed off its fourth largest city, Daegu, with 2.5 million residents and ramped up a first-of-its-kind national testing apparatus. The virus was still carried away from those places on one of the human threads that spin the globe.

The Fed has assumed the shock and awe posture, that we're going to fight the spread. Markets are tantruming internally. The White House is out of its depth in a way that will dwarf its prior shortcomings. The economic sudden stops that would accompany these types of containment measures would be severe, but will be made worse by indecision and stumbling into a sort of discoordinated micro-economic isolationism.

We're listing between paradigms. They require different tool sets in service to different objectives. We have to choose between them, and do it out loud.

In either case, (our super-capable) state and local health departments will have to take the lead. In either case, our government must run a sophisticated communications strategy and deliver science-based information without censorship. In either case, testing needs to expand dramatically, by several orders of magnitude.

Fortunately, in an awesome testament to latent American power, the FDA this week approved testing at hundreds of non-governmental labs around the country, where "a million people could be tested this week." A veritable rumbling to life of our detection capability.

If we are conceding the future persistence of this disease, that it will be with us now for awhile, the public deserves to hear that message. Millions will get sick. We prepare together.

If we plan to try to contain it, to shutdown highways or quarantine cities, if people should brace for income disruptions, the public needs to know that too. We prepare together.

COVID-19 puts us, at least temporarily, in a new paradigm. We need to choose which one.