For years now, each time I pony-up to a urinal in the States I look to find, inlaid on its porcelain roof, a small gray text:


They are a urinal powerhouse, it would seem. The grim digs of a 7-eleven may appear a far throw from slate counters at the Ritz, but a good bet says that on the wall in both bathrooms hang a couple of American Standard whiz wardens.

I've probably over-thought them, and maybe to that I owe the following hyperbole. But each time the second line of that label gets me thinking:

I imagine a scene: two American men stand at attention, ignoring each other while they par the reservoirs. The one zips up, but instead of sending his work to the sewers via sensor or lever, he turns behind him to a rack of one gallon jugs with filtered, fluoridated water at the ready. He yanks one from the shelf and shuffles back to his urinal.

He upends the jug over the drain and the second man has fetched his own gallon. Bieber through the PA at a courteous decibel, and the stubborn glug, are all that interrupt the quiet.

America's chief export is not petroleum, cars, or aircraft. Our chief export is standards. I don't mean the brand, of course, rather the second line of that label. A gallon of water for an eighth gallon of waste. Whether standard describes how things are or how things should be is the listener's mystery. But America does both like no one else. People abroad don't talk to us over beers about our commodities or our Airbuses. Some of them wonder at the prospect of husbands taking a backseat to their wives, others let you know that they know about Abu Ghraib and Guantanamo and the fall of Allende and our penchant for subprime asset-backed securities. Forget double standard. There's one standard; every other standard on earth, warts and all, has qualifiers that serve to redeem it from admissibility in a conversation with a gringo.

History requires I offer a thorough disclaimer here, to illuminate our imperfections and then to recognize how even mentioning our imperfections has some readers ready to hunger strike at the notion that our imperfections are but anomalies for study in a garden of otherwise well-adjusted, unimposing beauty-citizens populating these waves of grain and fruited planes. It is absurd to imply that America has it right in a way the rest of the world just can't understand. But my assertion does not regard rightness. It observes the propagation of standards we set for ourselves as they ripple into the world and by our mass, magnitude, and markets that wave goes out from us for decades shaping convictions and societies. If that is not true, it is only no longer true.

To vote for Donald Trump struck me as the rejection of opportunity, to continue using a gallon of perfectly drinkable water to wash our piss through the piping. But hey, that's democracy. Still, if the campaigns were prelude and the election the overture, we're well into the narrative bars.

President Trump's March 1 revocation of federal guidelines which protected transgender students' access to bathrooms - a sharp reversal from what he advocated as a candidate - sent the case of transgender Virginia high schooler Gavin Grimm back to lower federal courts. In a letter, Gavin remembered the early school board meetings where members of his Virginia home town congregated against him:


Word had spread throughout the community and people turned up in droves. After each frenzied remark, clapping and hollering reverberated throughout the room. I sat while people called me a freak. I sat while my community got together to banish a child from public life for the crime of harming no one. I sat while my school board voted to banish me to retrofitted broom closets or the nurse’s restroom...My school board had invalidated me in perhaps the most humiliating way possible.

It's worth something that Silicon Valley is pissed and vocal. And Americans' scrappy bent to raise hell at least buffers the blow to our standard.

But, in their minds, has the world already laced us to the sink of this pebble man? Trump's removal of protections for transgender students from the cloister of federalist ideals harmonizes too well with Russia's decriminalization of domestic abuse. We share a stage on which Putin's and our standard are dots which merge given distance from the looker. We say trans-people should boast their bruises together with Russian women so the debate of their right to well-being can fall to more local jurisdictions; that is not inappropriate conflation, rather the natural path the eyes will take when watching the bullymen of the modern world spitting from their pulpits and derelict in defense of their people.

Our standard is our copy and our headline, the seal people break when they jar open a ply-board box full of rice bags. It is stepped off by our Marines and articulated by our diplomats. Our clergy debate it, our academics inspect it, and sure enough writ into plaster, steel, and porcelain our entrepreneurs export it. 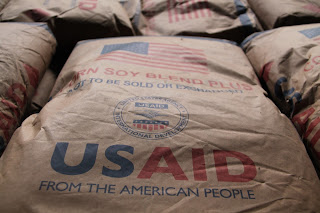 To forget the context of those standards is to fly a kite without minding the trees, to bury our fortunes on the beach of a rising sea and sink our flag over top.

Sometimes the world is not as good as we want to assume it is and if, in that world where Boko Haram obliterates bus stations and disappears school girls, Moscow moves to unencumber wife beaters, and disturbed white men remain the unchallenged gravest source of terrorism in America, failing to distance yourself from the world's leagues of disassembly will land you - will land us - in the memory of their fold. The tragedy of their crime is not only that they want to nullify the work of your Rotary Clubs at local schools or prisons, or that they require weeks to muster a "disavowal" of the KKK who fight to tatter the webs for which you labor. It's not even that they want to do it in your name.

The tragedy is that they want to make you feel like you deserve it, that you are entitled to lower our standard, to experience an expression of self pity where only in the bosom of a strong man whose pockets run over with school yard epithets for people browner or more Muslim than you, will you feel whole again. To feel like a man as you flush opportunity into the pipes.

American standards have, at times, supplied the world with terror so dark as to engender new mythologies. No doubt we visit the earth's peoples in the vogue of Hero and Monster. But the more epic of our standards have found us reaching to liberate something captive or honoring relationships which would make us conspirators in the forward movement of mankind. Or engineering a low flow toilet. May we mind the propagation of our standards when we choose what to hang on our walls for the world to see.