The American Worker - The Pursuit of Recovery

The Great Recession began in November, 2007. A person can toggle backward through charts and reports and find, sneering up at them, that two year gully now scarring American economic history. It's truly a cliff, one inverted peak in an exclusive class of terrifying American moments, dating back to Lincoln's time.


Being an amateur peruser of economic stuff, I hadn't fully appreciated the monarchical place of that crash in the modern world until I saw it on a hundred different charts, in dozens of metrics: market volatility to unemployment, industrial production, political uncertainty, from birth rates to the number of families forced to double-up in a household. Statistics like that last one fascinate and disturb me most. But for surveying shelter numbers and braving a head count of people sleeping under bridges, those people (almost 25% of them children) are very nearly invisible and their lobbies don't carry the caché of Oil or Guns.

Recessions are useful as a test, in this way, to reorient policy. The people daring tightropes strung between their paychecks remain invisible until something comes along to shake them off. Whatever made their walk so perilous in the first place - immobility in work due to education, underwater mortgages, unblunted illness - can then be identified, and maybe targeted with new policy. There is no private sector substitute for this kind of atmospheric vantage point over the scales of well-being in America, and there exists no public sector substitute for the engine fire of American firms taking a clearly stated objective and building prosperity in its pursuit.  The internal nature of the Great Recession - bad lending practices, an obsession with speculative securitization - reminds us that the market will take us aggressively into whatever bearing we give it, thus if prodding of the market itself becomes our goal, people will lose.

As widely calamitous as the fall was, the "recovery" was not singular in its form.

"Median" numbers are the neutered version of human experience, no doubt, with all the texture blended out. So restating that metric, here's the median loss in a household's purchasing power per month for each year against 2007, taken from St Louis Fed data. Take a second to absorb this:

Those numbers are brutal. Indicative of my station in life, perhaps, those look like student loan payments. Maybe groceries to others. Maybe a partial daycare payment.

Homeownership is foggier, since in 2007 it had been bubbling for some time.  But when it fell, it continued falling for 10 years.  It has bounced, but still hangs beneath the historical average.

Finally, below we have the trajectory of the S&P 500 - the index which, in theory, reflects the earnings of America's 500 largest public companies:

Astounding, so-big-as-to-be-meaningless sums of money were lost in September of 2008 alone, including the largest point declines in the history of the Dow Jones Industrial. You don't have to spend much time watching markets to feel the weight of that collapse, what it means for people elsewhere in the economy - workers and pensioners - as that thing craters into the red, how tremble the tightropes.

As you can see, though, the stock markets came roaring back, marking and sustaining a pace that no other mechanism came close to matching. Much of the smart money bailed out of the markets long before bottom, and gains since that 2009 trough have been king-makers: nearly 17% a year, 8 years running, without accounting for the day-to-day profit plays of a volatile market.

Unfortunately, the Median Income folks who still have less purchasing power than they did before the crisis don't own the S&P 500 to any important extent (pensions, a big caveat, tabled for another conversation), and national economic growth has gone sideways. So what gives?

As I wrote about in Let's Make America Boring Again, with Congress unwilling to get off the bench since the Tea Party victories in 2010, the Federal powers that be looked for other levers to edge the economy forward.  Former FED Chairman Ben Bernanke began a policy of monetary stimulus called Quantitative Easing, illustrated above by the blue line marching skyward, which current FED Chair Janet Yellen has continued, and may just now be trying to wind down.

Above all, understand this:  QE comprised injections of liquidity into the U.S. economy by the Federal Reserve, to ensure that there was money available for businesses to borrow cheaply so they could make investments in the interest of their operations.  Importantly, though, QE's architects assumed that businesses would take that money and hire people or build new mechanical capacity, generally make investments that would improve productivity and growth.  Some of that happened.  Elsewhere, though, that cheaply borrowed money has been spent disproportionately on share buybacks and dividend payouts, both of which are strategies adopted by corporate boards and executives for boosting a company's stock value in low-growth environments.


Why all the stock talk? Because, we know that 10% of America owns 90% of stock and corporate debt. How many households making $50k a year have real positions in the S&P? About as many as you'd guess.  Never in our history have we executed a monetary maneuver like the $4 trillion stimulus you're seeing on the chart above and for it's magnitude it is touted as one of few enormous interventions made to hold at bay the worst potentialities of the Great Recession. 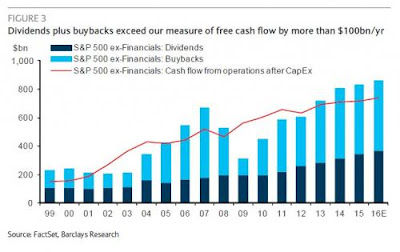 It was an intervention, however, that by and large didn't make it to 90% of the population directly, and whose hopes for "trickle-down" middle class benefits were dashed by the uses of that borrowed funding by companies looking to juice their stock value for shareholders.

These realities have to be the guides of future policy.

We do well to remember two questions:
Where is opportunity to pursue prosperity lacking?
And, what are the investments we can make which promise the best return?

That painfully simple framework should underpin Federal economic policy. Yet, currently, our administration is talking about long-exhausted ideas that reduce the proportion of federal revenues which come from both corporations and high-earning individuals, while holding mid-level earners even.  By any other name, that is a tax increase on the middle class; it's simply that your payment of the tax comes in a loss of services you'll need to make up out of pocket.

The chart below provides a good indication as to where the lion's share of our next efforts have to fall.  This is the proportion of national income currently flowing to the worker, hovering just over its 80 year low. These 2010's are every bit as roaring as were those 1920's. 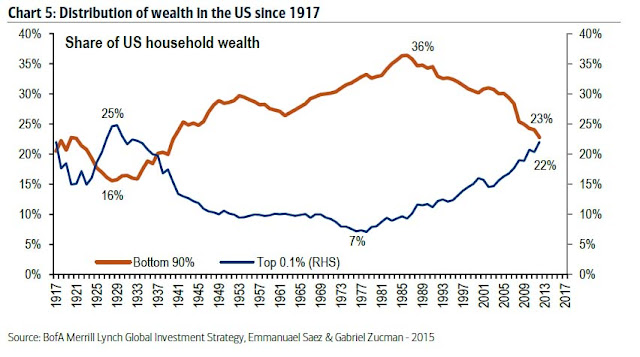 So - burning things down is easy, nothing if not a proven campaign strategy. But what of creation? What the hell do we try in order to capture big returns on investments meant to open up opportunity to people who haven't seen it in awhile?

First, take these other things off the table: corporate and high-earner tax reductions cost a lot of money and offer little in returns. Neither rate is at a historically high level, profit margins are high, and none of it matters anyway if the average American can't afford to buy their products. Second, border tariffs sound tough, and President Trump's new definition of "fair trade" conjures a certain nationalistic tingle akin to fist pumps and egging the weird kid's house. But they are a rhetorical distraction that won't help us economically and may cause major problems for particular industries whose exports are extremely sensitive to trade agreements, like Minnesotan agriculture. 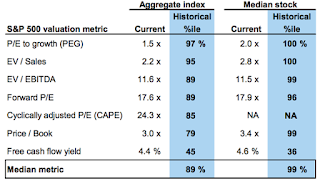 As this business cycle matures, we find ourselves at a serious juncture. Corporate debt as a % of GDP is at an all-time high, because corporations have borrowed to boost their stocks. As one might expect, then, most metrics (table right, Goldman Sachs) show the stock markets are dangerously over-valued, bordering on delusional. Inflation is ticking up but growth continues sideways. From the arm-chair economist's point of view, we don't need another coke line off the back of the brass bull, the worker needs some protein, a pile of vegetables, and maybe a good game cheeker from Garrison Keillor on our way out the house every morning.

First is bending our lens enough that we can see the jester as he plays us and shoo away non-sensical propositions as he flings them.  Next comes what we can do for people for whom this recovery may still prove fragile or fleeting.

=======
Post-Publish Note - 06 Mar 2017:  In further reading I have found that I shouldn't be so quick to dismiss the Border Adjustment Tax currently being discussed, as it's economic founding (even if not its delivery thus far) may be more promising than I understood.  Below are some links to check out and I'll continue posting more:

Editorial from two Professors of Economics